aAlarm V2 : Intrusion detection with an Arduino based alarm

Working on other topics since last update I’m back to improve this project some more.

Also, I’ve replaced the old fashion and fat laptop with a tiny RaspberryPi. 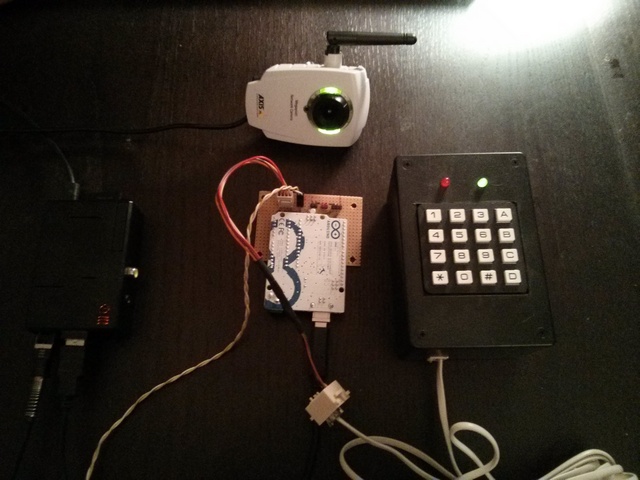 A nice device to replace my usb webcam :

Real time analysis is a lot faster than with ZoneMinder.

Configuration through a classic text file is a easiest and efficient.

Using netcam_url allows to get image from camera (IP:8081/jpg/image.jpg for Axis 207MW)

Motion event can be stored in a database, which is convenient to reuse images.

Everything looks fine, except the fact that Motion requires some tweaks in order to get a fast motion detection.

I will try to explain in details my aAlarm setup. My next task in to improve some Perl code and Django web monitor.

I’m also planning an Android interface, but that would take some time.

Recently, I’ve reinstalled aAlarm to a fresh Ubuntu Server box. For unclear reasons I could’nt use ZoneMinder at all, my C270 is not detected anymore.

It’s working smoothly with Motion. Motion service is also faster to start than ZoneMinder. Motion does not come with a complete Web UI (as in ZoneMinder), but it’s by far easier to use. Also, Motion provides db support. Each recorded image could be registered into db. I will integrate Motion with aAlarm, allowing replace ZoneMinder service.

Soon more about it.

AAlarm is an alarm system based on Arduino.

Feel free to leave your comments at the bottom of the page.

aAlarm consists of three electronic modules connected via USB to a PC.

The main module is based on an Arduino Uno board, connected as a classic Arduino shield.

The main module concentrates connections to : 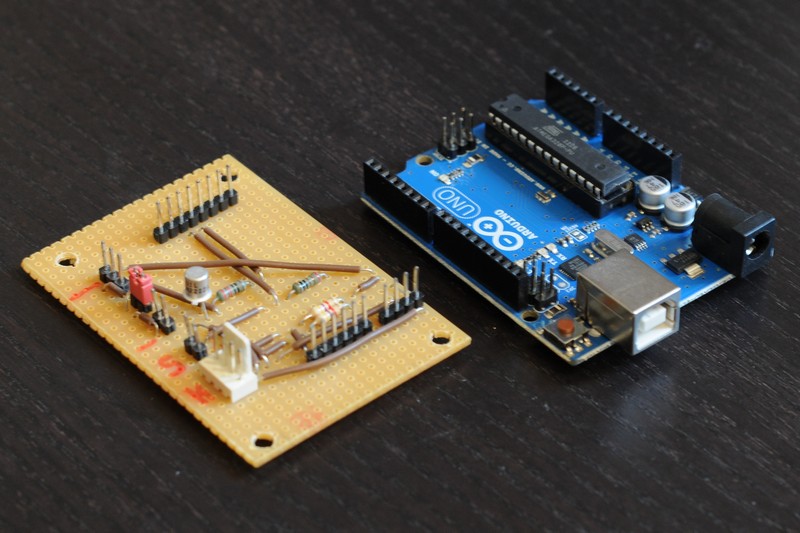 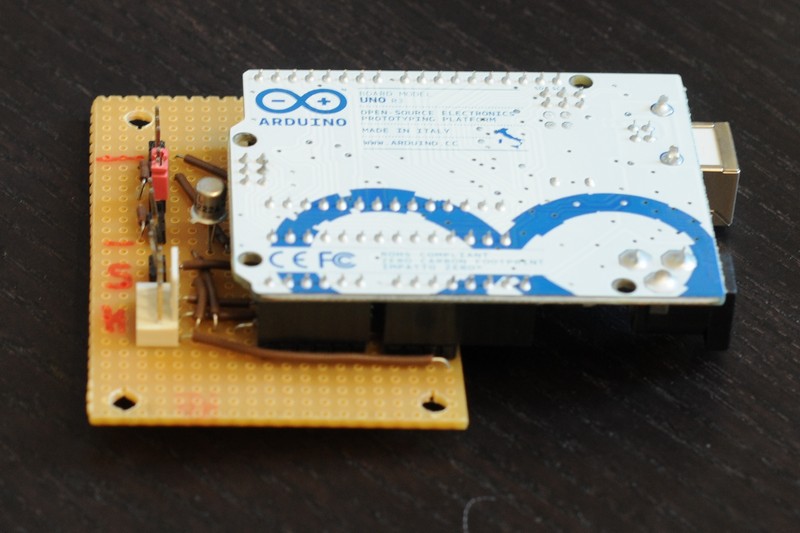 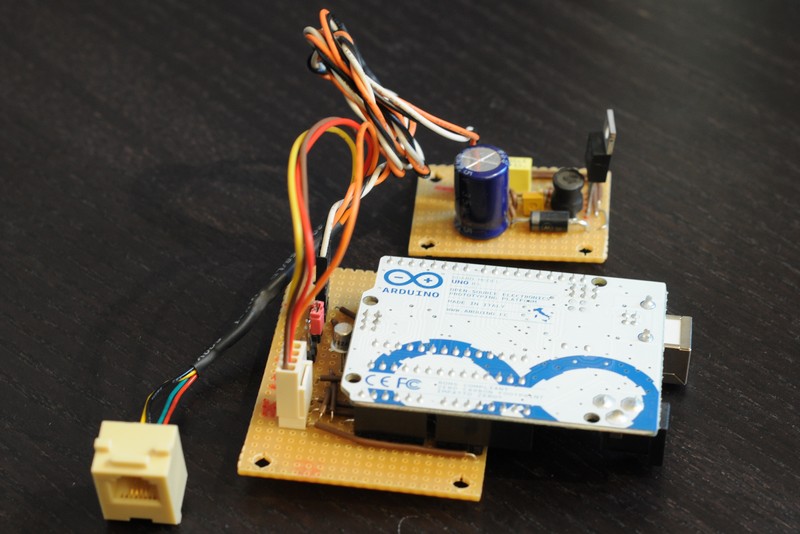 Figure 4. Main module with Arduino, RJ11 connector (to control board), siren power board (without siren!) 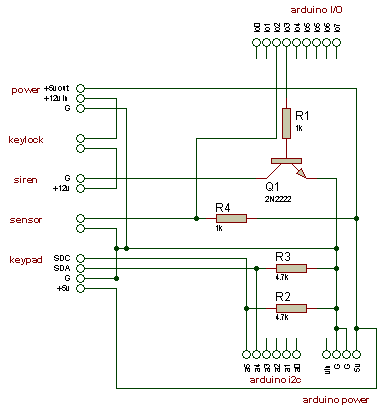 Connected with I2C, it can be placed relatively far from the main board (more than 5 meters in my case). I used a telephone-type cable with RJ11 connectors on both sides for a clean and easy connection.

The connection cable also carries power for operating the board components (5v). 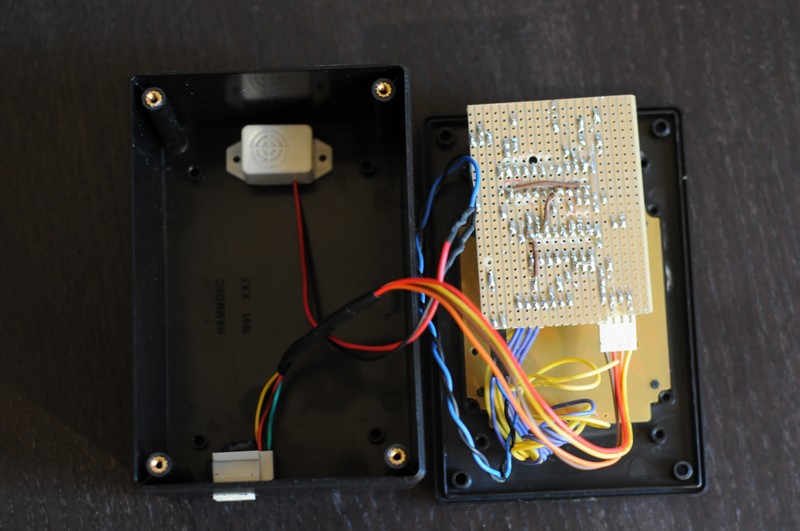 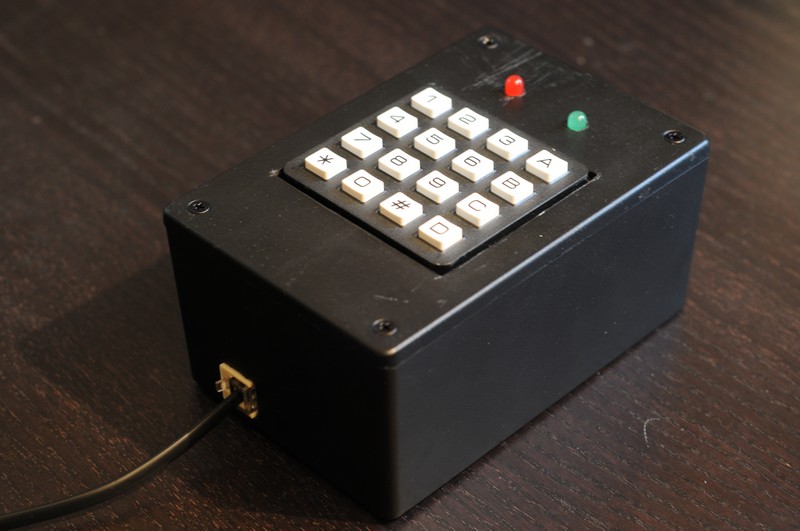 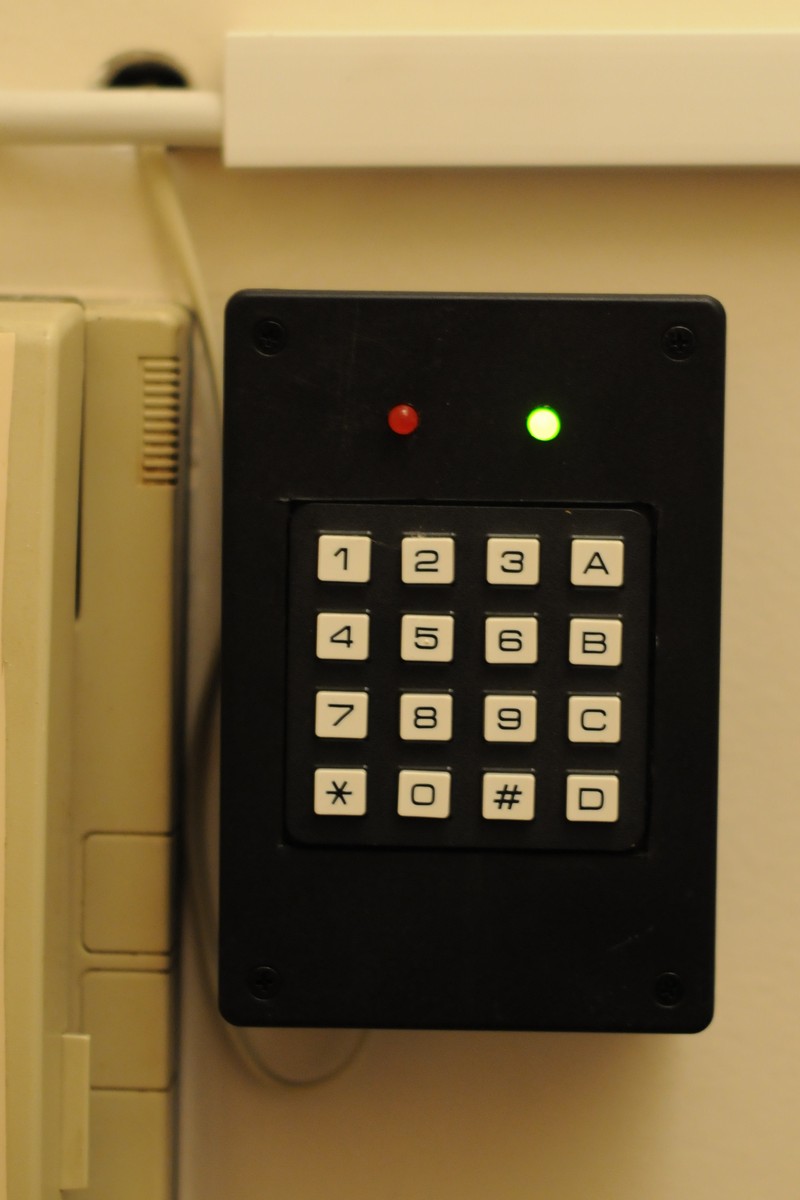 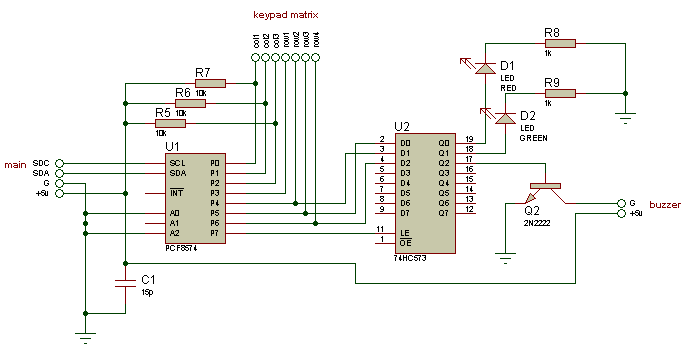 The siren is supplied with current by a voltage booster circuit. (This type of siren requires small current to operate)

Thus, the module converts the Arduino 5v output to 12v, with a sufficient level of decibels to wake the whole building.. 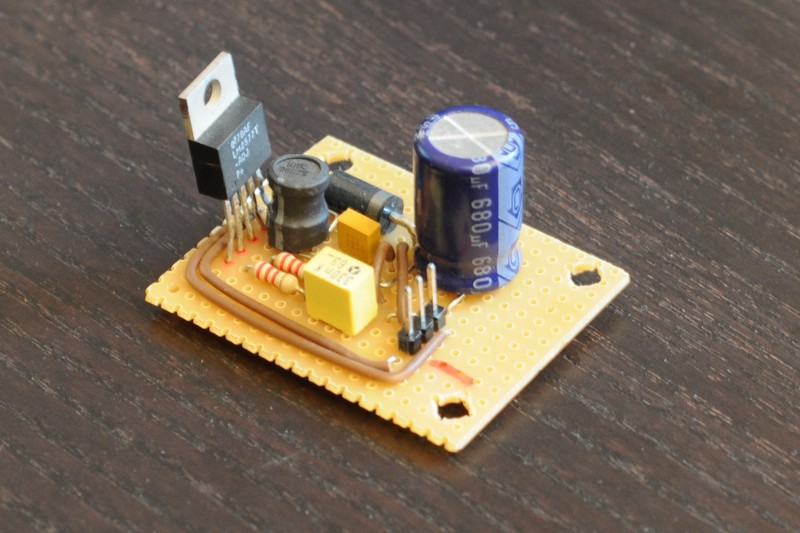 Arduino has 14 digital I/Os. With siren connecyed, it is possible to connect 13 sensors on the main module.

Currently, I use a single detector door. It consists of a simple second hand switch.

Placed against the door of my apartment, the sensor detects door status : Open or Closed.

I’ve tested with multiple sensors connected (some simple switches). However, I would try to connect a gas or a smoke detector on free inputs. 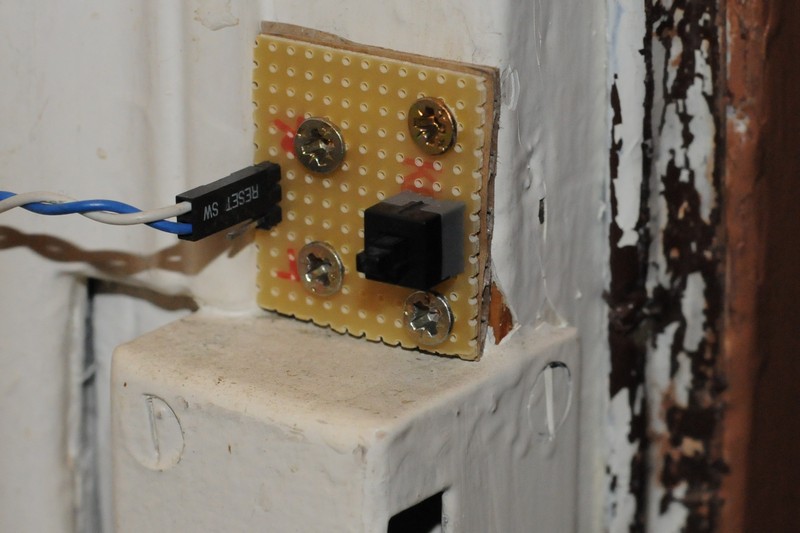 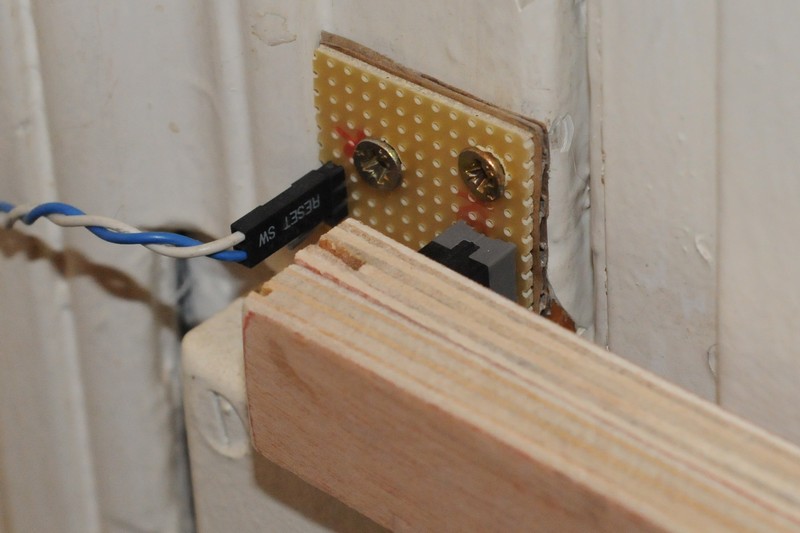 ZoneMinder allows you to use one (or more) USB webcam.

I use a cheap Logitech cam to monitor the front door. 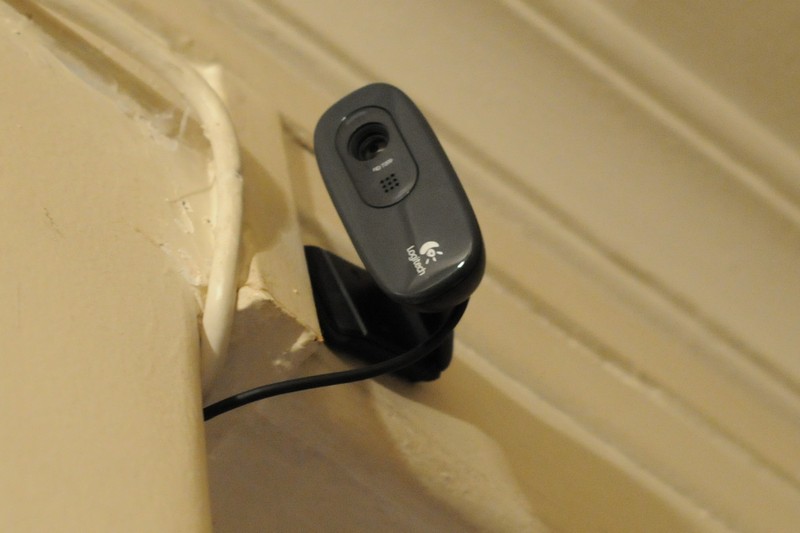 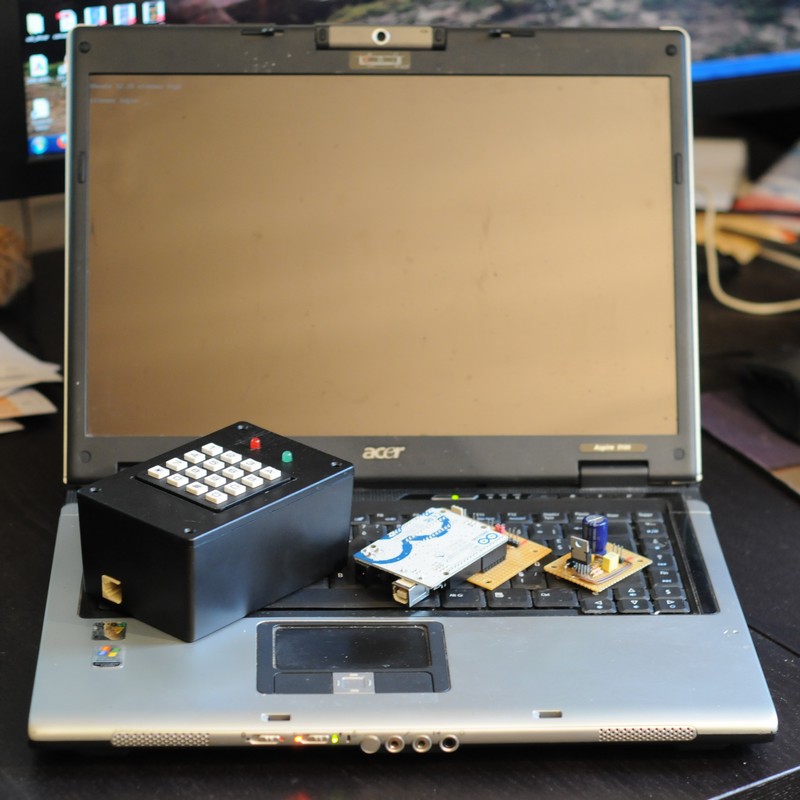 I use a spared amplified speaker, placed near the door. Play music when I’m leaving home.

The Controller and the Web client communicates through a data model (MySQL) built with Django ORM. 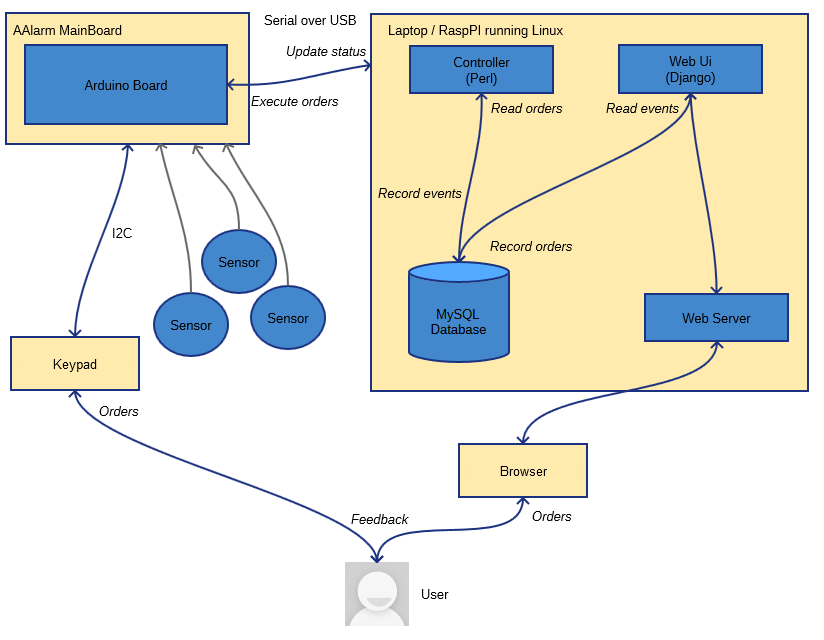 This is the main software component.

It communicates with Arduino, checking sensors states and determines the overall status. On the other hand, it intercepts commands from the web client to run them.

Default settings are provided by a configuration file. Later, settings are saved in database and becomes the reference.

An evolution from the first version, simplified and more effective.

Checks sensors states, in case of change, notify the Controller. In addition, it controls the electronic components (LEDs, Buzzer, Siren) according to the orders passed by the Controller.

The Web client provides a real-time view (Ajax) of statuses and allows to remote control aAlarm. 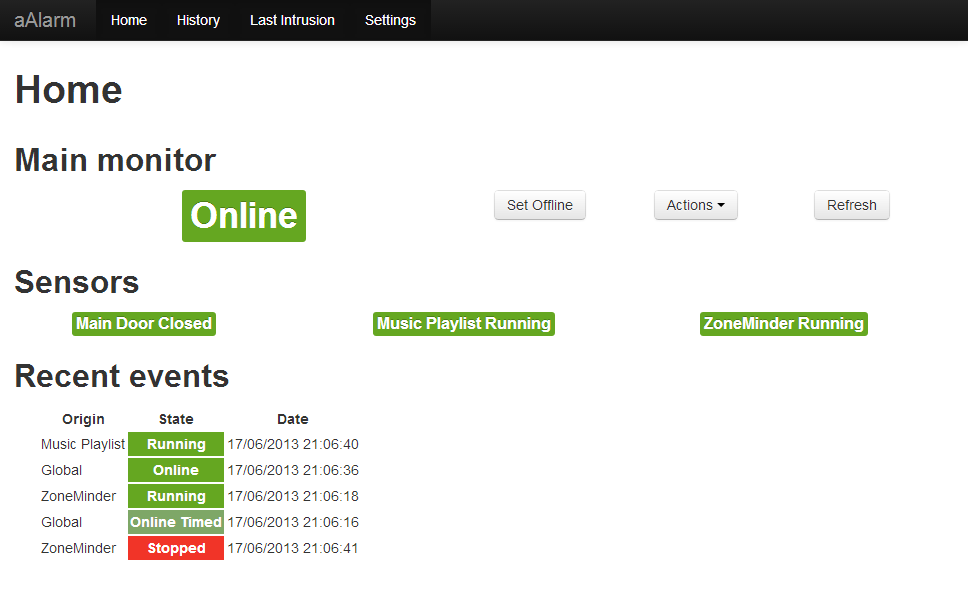 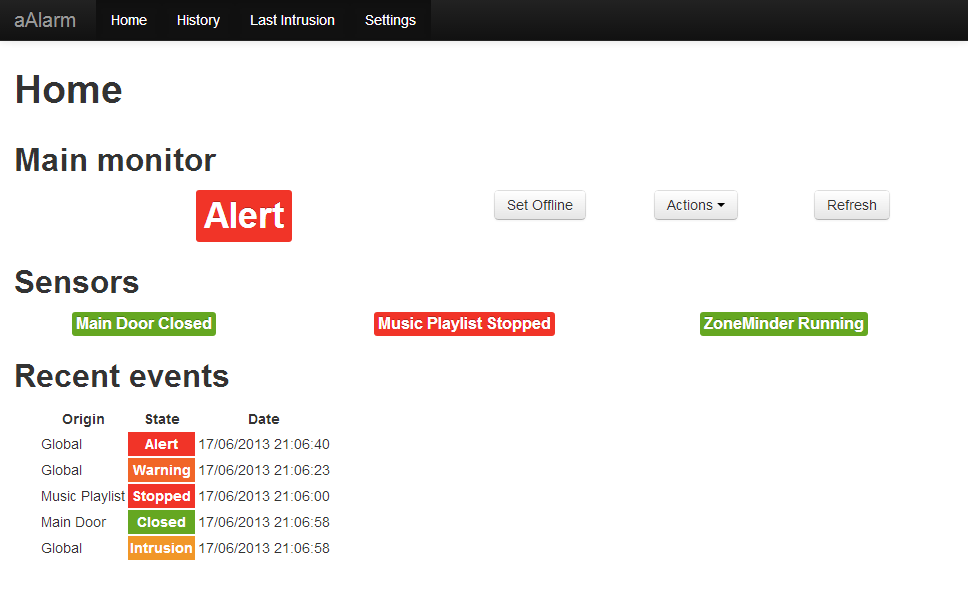 The data model is maintained by the built-in Django ORM. 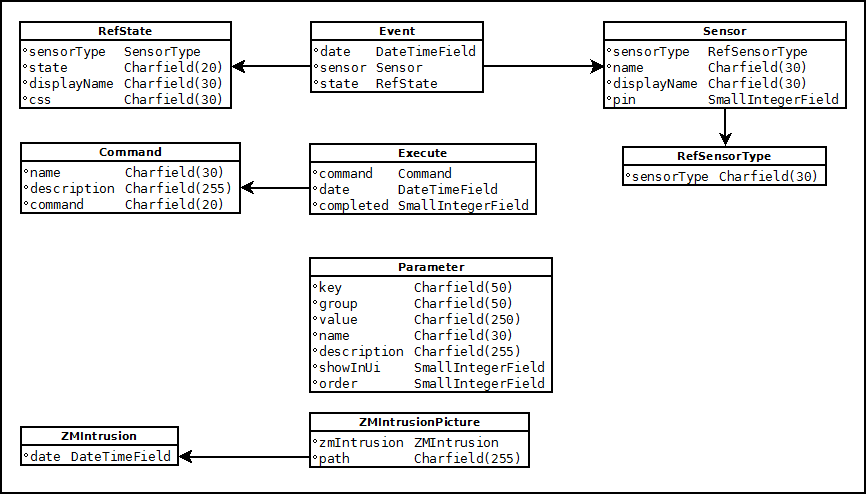 This optional service is launched by aAlarm, and provides access to intrusion recordings.

AAlarm is based on six linked global states.

Each state represents a different situation that causes actions

The transition from one state to another is determined either by user actions or by a changing sensor state. 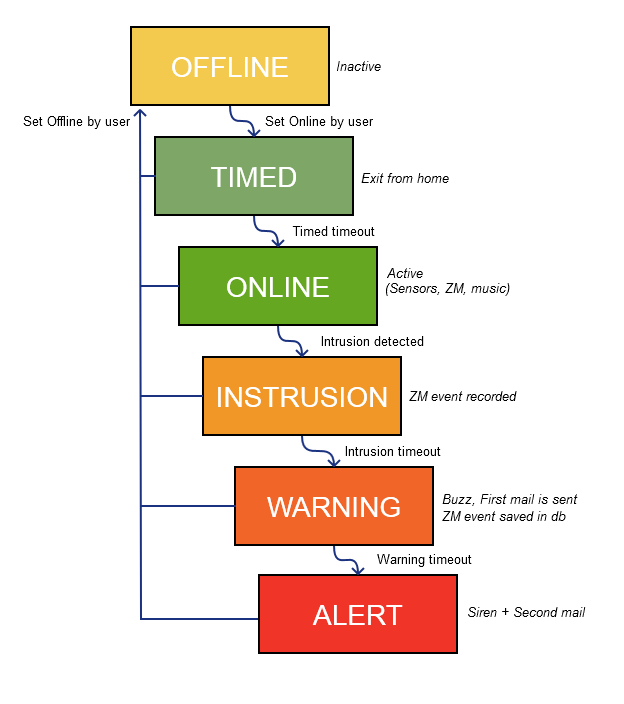 The door sensor can be open or closed. It is possible to create other types of sensors through configuration.

Monitoring of optional services (ZoneMinder and playlist playing ) are implemented as sensors. Thus, they appear in the interface as conventional sensors.

A very basic system, using matrix keyboard
Communicates to a PC through USB and mail sending
Then I made aAlarm current software

The first full version AAlarm was functional, but basic: